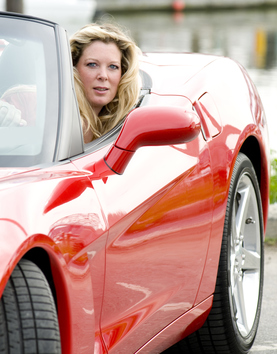 Tracey Parish sat at the red light and refused to fume, as she often did, over the time she was kept waiting in traffic.

Today, she was glad for the wait. She wasn’t looking forward to reaching her destination and enduring the hostile reception she would surely receive. Still, if she wanted her things back, her grandma’s heirloom quilt, her silver-backed hand mirror, even some of her underwear, she’d have to see Greg one final time.

She blinked back tears. Losing the beautiful quilt that Granny had so lovingly hand-stitched for her would be heart-breaking. She remembered the day the old lady had pulled it from her own ancient hope chest. “See here?” she said, pointing with a bony finger, “There’s your initials, Sugar. When you get married, you can embroider your groom’s next to ‘em.”

Wherever she went, Tracey had taken that quilt with her. It still bore the fragrance of Yardley’s English Lavender, Granny’s favorite soap.

During that last terrible phone call, Greg had threatened to throw out it and all her treasured possessions or burn them. He’d do it, too. She’d seen him do much worse.

A man in a neighboring car smiled at her, but she kept her expression neutral. Her flirting days were over, now that she and Johnny had found each other again.

The light changed, but her own lane was still red. As the turning cars streamed past, she pulled the scarf from her head and let her long blonde hair cascade over her shoulders. It felt good to have the rental car’s top down. Greg had never let her put the top down in his car. How could she have ever let him run her life so completely? How many times had he demeaned her, cheated on her, even hit her, and then assumed everything could be made right with a handful of flowers or a love song murmured in her ear?

She tossed her head. He’d hate it when he saw that her hair was down. He had only wanted her to wear it loose in private, for him.

Her left hand rested on the steering wheel. She held it up and looked at the diamond ring on the third finger. The stone wasn’t very big, but the love behind it was. She’d promised Johnny that they’d be married as soon as she got back from California, even if it meant going to City Hall. Mom and Dad would want a church wedding, but they could do that afterwards.

Why had she ever left Texas? What on earth did California have that Texas didn’t?

“Absolutely nothing!” she said aloud.

She smiled grimly, thinking of how out of place Greg had looked in her tiny hometown, where nobody knew what a great celebrity he was supposed to be. He’d acted like a jerk, looking down on everything: what her family wore, their ranching life, even the blue ribbons that lined the walls of the horse stalls. He hated the food her mother served and snorted when the family bowed their heads to say grace.

Worst of all had been the fistfight between Greg and her brother Hank. She’d never forget the image of her long-haired boyfriend, blood streaming from his nose into his beard, demanding that she leave with him immediately.

She rested her forehead against the steering wheel. “Stupid, stupid girl!” she chided herself. “Why did I go back with him?” She’d left, despite her mother’s tears and her father’s angry words. Her brother had stood on the porch, out of breath, with the saddest expression on his face. He had always understood her, but this time, she could tell he was totally bewildered.

If it hadn’t been for Johnny’s letter, I’d still be here, under Greg’s thumb.

Hank had contacted her former high school boyfriend, who offered to drive out to L.A., pick her up and drive her back to Texas. And she’d accepted, being careful not to let Greg guess her plans.

It was on that trip home that she and Johnny had realized that there was still something special between them, and within one month of arriving back home, she’d accepted his ring.

As she had driven past the old familiar Los Angeles landmarks and made the old familiar turns, her heart had begun to beat faster. This would not be a fun encounter, but maybe it would be okay; maybe he’d be away, out of the apartment.

I don’t have to do this. There’s nothing stopping me from turning around and going right back to the airport.

She frowned. But I can’t let Greg win. I have to show him that I’m my own boss now. He’s not going to burn my wedding quilt. I have a much better use for it.

The light changed. Resolutely, she shifted into drive, merged into traffic and was never seen alive again.
CHAPTER ONE